'I Forgive You': Widow and Congregants of Pastor Killed by Drunk Driver Shock Judge, Move Prosecutor to Tears 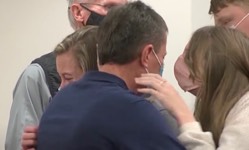 [Faithwire.com] Family members and congregants of deceased Minnesota Pastor Verlyn Strenge openly forgave the man responsible for the late preacher's death during a Nov. 24, hearing, shocking a judge and moving a prosecutor to tears. (Image: via Faithwire)

"We forgive you," Jayme Nelson, Strenge's daughter, said to David Nelson, the man who crashed his truck into her father's car last year.

Nelson was reportedly going nearly 70 mph and had a blood-alcohol level of 0.267—three times the legal limit. He will be heading to state prison for three years after being found guilty of vehicular homicide.

"As hard as it was at first, we want you to know that we have been praying for you for the past year, because we know your life has been impacted by the biggest mistake of your life," Jayme Nelson continued.

The kindness and compassion didn't end there, according to Inforum.com... Subscribe for free to Breaking Christian News here