Council Votes to Allow a Menorah on Public Property for First Time, and This City is Seen in a New Light (SLIDESHOW)

"At some point we have to be bold. We have to trust our community and be willing to fight. As public servants we have to recognize and be in tune with the pulse of our community. I believe this is a faith-based community. I believe that not just Ontario but all of Richland County is faith-basedâ¦ I am not interested in the beliefs of Los Angeles or Columbus for that matter." -Ontario City Council President Eddie Gallo

(Ontario, OH) — [FrontlinesOhio.com] Last week, a religious display was the talk of the town in Ontario as City Council gave the green light for a religious symbol to be placed on public property. By a 5-1 vote, City Council decided to permit a privately-sponsored menorah commemorating Hanukah to be placed at Marshall Park for two weeks. (Image: Courtesy of Frontlines Ohio)

After a request for the holiday display was made during Council's last meeting, several of the council members commented they learned a lot in their research about the menorah. The Jewish lampstand represents religious freedom in the face of government tyranny.

"Mr. (Benjamin) Mutti educated me at last Council meeting on what the menorah stands for," commented Council Member Sherry Branham. "I honor everyone's religion and I am proud of what the menorah stands for. I think it is the right thing to do by supporting Mr. Mutti as he educates his children. I do not feel he has jeopardized anybody in Richland County, especially those in the City of Ontario."

According to Benjamin Mutti, a number of surrounding communities already have holiday religious displays on public property to commemorate Christmas, including a nativity scene at the Columbus Statehouse in 2019. By a 7-2 margin, the US Supreme Court upheld the right to display the Mount Soledad Peace Cross on public grounds in 2019 as a World War One memorial. The menorah is the first known religious display allowed on city property in Ontario's history.

Ontario City Council deliberated over the constitutionality of holiday religious displays on municipal property and how to regulate displays perceived to be offensive speech.

Ontario Councilman Dave Rehfeldt asked, "Which side do we want to be sued by? By the group that has a legitimate right to display? Or by the group we agree we would not want? I have no problem fighting for this (menorah) display. I think we all agree with what this group wants to do. I am tired of being afraid of things that could happen."

Rehfeldt made the motion to grant permission for display on Marshall Park property recognizing Hanukkah for two weeks between November 28th thru December 12th. The motion passed with Councilman Josh Bradley as the only dissenting vote.

The following week, citizens braved wind chills in the twenties Sunday afternoon to hold a dedication of the nine-branched menorah at Marshall Park. The park will also be hosting a Christmas Tree Lighting on December 2nd with performances by several high school music groups at the same location as the menorah. 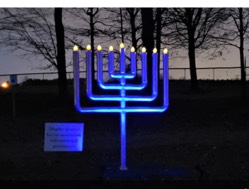 Click Here and scroll down to view a slideshow of the dedication ceremony of Ontario's first menorah on public property. (Screengrab image)

One of the speakers at the dedication ceremony commented that it was refreshing to see elected officials from both sides of the political aisle embrace the community's religious traditions.

"I had council members from different sides of the political spectrum talk to me about their support of the menorah and religious freedom," says Benjamin Mutti. "There is a real respect for faith traditions in Ontario and it appears to have a unifying force. People remember the famous "Silent Night Christmas Truce" where opposing armies during World War One ceased fighting to celebrate the Christmas holiday together. In the same way, it is encouraging to see elected officials come together in our day and respect the local faith traditions of their constituents. In this day and age, it truly is a battle to keep our local identity."

Ontario City Council President Eddie Gallo commented, "At some point we have to be bold. We have to trust our community and be willing to fight. As public servants we have to recognize and be in tune with the pulse of our community. I believe this is a faith-based community. I believe that not just Ontario but all of Richland County is faith-based. I want to operate in their best interests with the understanding of who my neighbors are, what they believe, and what they put us in these positions with those beliefs for. I am not interested in the beliefs of Los Angeles or Columbus for that matter." Subscribe for free to Breaking Christian News here