'We Made Our Case': Marine Reprimanded, Slapped With $5K Fine for Criticizing Afghan Withdrawal

"...All I asked for was accountability, for people to comment on what I said and to say, 'yes, mistakes were made.' And had they done that I would've gone back into rank and file, submitted, and accomplished what I wanted." -Lt. Col. Stuart Scheller Jr. 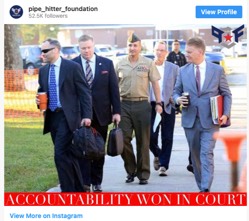 The Marine pled guilty to all charges during his court-martial trial on Thursday at Camp Lejeune. The judge issued a letter of reprimand and docked $5,000 of pay for one month, theÂ Military TimesÂ reports.

In a LinkedIn post,Â Scheller had claimedÂ that "the current military-industrial machine is broken," then asked, "does the current government still serve the interests of the people?"

In another post, he stated that there was a lack of accountability from political leaders during the botched withdrawal from Afghanistan which prompted him to speak out.

"Did anyone raise their hand and say, 'We completely messed this up?'" Scheller had asked. "I'm not saying we can take back what has been done. All I asked for was accountability, for people to comment on what I said and to say, 'yes, mistakes were made.' And had they done that I would've gone back into rank and file, submitted, and accomplished what I wanted."

One of Scheller's attorneys, Timothy Parlatore, said his client went through an "emotional roller coaster" after posting his first video, which other service members and veterans go through privately.

Scheller was sent to the brig on Sept. 27 and was released on Oct. 5 after his lawyers reached an agreement with the Marine Corps.

"We made our case, left it all on the table,"Â said Scheller. "I feel good about everything I said."

"I think that the judge's decision was very fair," Parlatore explained. "He definitely considered all of the facts, an aggravation and mitigation, and I think that this is a good and just sentence, so we're very pleased with the result here."

The Secretary of the Navy still has to decide whether Scheller will be honorably discharged or not. Currently, he is considered to be on active duty.

The Pipe Hitter Foundation, an organization run by former Navy SEAL Eddie Gallagher and his wife Andrea, has been following Scheller's case and happily shared the update on their Instagram page.