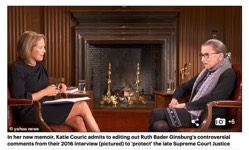 [Faithwire.com] Veteran broadcast journalist Katie Couric admits in her forthcoming memoir that she edited a 2016 interview she carried out with the late Supreme Court Justice Ruth Bader Ginsburg. (Screengrab image: via Daily Mail)

The former "Today" anchor wrote in her book, "Going There," that Ginsburg told her during their discussion that athletes kneeling during "The Star-Spangled Banner" are expressing their "contempt for a government that has made it possible for their parents and grandparents to live a decent life."

Couric argued she edited the comments out of the interview because she "wanted to protect" the Supreme Court justice, whom she believed had a "blind spot" on the issue of racial injustice, according to the Daily Mail.

Ginsburg, who died in September of last year, made the comments after Couric asked the jurist for her thoughts on former 49ers quarterback Colin Kaepernick, who, at the time, drew stark criticism for taking a knee during the national anthem.

"Would I arrest them for doing it? No," Ginsburg said of athletes protesting the anthem. "I think it's dumb and disrespectful. I would have the same answer if you asked me about flag burning. I think it's a terrible thing to do, but I wouldn't lock a person up for doing it. I would point out how ridiculous it seems to me to do such an act"... Subscribe for free to Breaking Christian News here