More Than One Hundred Ohio Clergy Tell Biden 'There Is No King But King Jesus,' over Vaccine Mandate

"Testing an experimental vaccine normally takes ten years to properly evaluate its performance. It is immoral for persons to be forced within a matter of months to take an unproven COVID-19 experimental vaccination associated with nearly fifteen thousand deaths, 1.5 million reports of adverse events, and at least one hundred thousand breakthrough COVID infections in vaccinated persons. While the Bible calls every human being precious, the Biden Administration is treating its citizens like human guinea pigs." -Pastor Jerry O'Brien 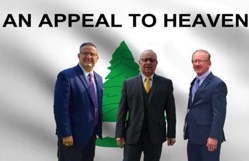 (North Central Ohio) â [FrontlinesOhio.com] Joe Biden's executive orders mandating shots are not popular with the American public. With resistance to the experimental COVID-19 vaccination going viral across the country, a group of Ohio clergy are taking a jab at the White House's mandate. (Image: via Frontlines Ohio)

Leading clergy representing over one hundred congregations across the Buckeye Bible Belt are giving their disapproval of the national vaccine mandate and have written [Biden] in anÂ open letter.

"Joe Biden can take his medical advice somewhere else, we are not going to listen to him," says Pastor J.C. Church, one of the one hundred and one clergy co-signors. "This 'President' and his godless administration have foot-in-mouth disease for every issue they touch. Since he does not have the scientific data nor the trust of the people, he uses fear to try to get compliance. Authoritarians in Marxist governments use this method."

Pastor Church points out that as health care workers and military servicemen are losing their jobs for not taking the shot, illegal immigrants with no health screening are pouring across the US border and are exempt from the Biden vaccine mandate. "Because of this derelict policy, it is not surprising there has been a three-fold increase in COVID cases this year with the vaccine compared to last year when there was no vaccine. Judging by his incompetent policies, this 'President' hates our country and has no interest in ending this pandemic."

In their letter, the clergy stated "To combat a virus with an overall 99.74% survival rate, the federal government should not impose its will on persons by mandating COVID-19 experimental vaccines and removing other alternative treatments. The people should have the ability to make their own health decisions," the open letter said.

According to another clergy co-signor, forcing people to take the unproven COVID-19 experimental vaccine is immoral.

"Testing an experimental vaccine normally takes ten years to properly evaluate its performance," says Pastor Jerry O'Brien. "It is immoral for persons to be forced within a matter of months to take an unproven COVID-19 experimental vaccination associated with nearly fifteen thousand deaths, 1.5 million reports of adverse events, and at least one hundred thousand breakthrough COVID infections in vaccinated persons. While the Bible calls every human being precious, the Biden Administration is treating its citizens like human guinea pigs."

Ironically, the same day ...Biden gave his mandate saying "this is not about freedom or personal choice," ...Kamala Harris criticized a new Texas law banning abortion. She told abortion providers gathered at the White House that government shouldÂ not interfereÂ with personal health decisions.

In response, the clergy commented, "Mr. 'President' your Administration believes the unalienable rights of life, liberty, and the pursuit of happiness do not come from our Creator GOD but rather from a federal government which does not know its right hand from its left. Your Administration's politicization of the truth is profound."

Truth be told, the clergy believe that studies out of theÂ Cleveland ClinicÂ andÂ IsraelÂ indicate natural immunity found in the human body can be more effective than the COVID-19 vaccinations.

"GOD-given natural immunity found in the human body is stronger than experimental shots that have not been properly clinically-tested," says Pastor John Bouquet. "If the federal government really cared about its citizens, other time-proven methods of treatment would not be blacklisted by the Federal Drug Administration. With this micromanagement of medicine by the Biden Administration, they may take chicken soup off shelves next to prevent us from treating the common cold."

Meanwhile, vaccine makers are getting the silver spoon treatment. Vaccine makers have full legal immunity from lawsuits while the natural immunity of Americans who have already had the virus are ignored.

Pastor Bouquet declares "As this country is taking a turn for the worst, we are telling federal bureaucrats: We do not need your help, the LORD is our Balm of Gilead, He will be our Physician, andÂ thereÂ will be healing for His people."

The Ohio clergy closed their letter by saying, "This unilateral and divisive order is unethical and tantamount to what a totalitarian king would dictate. Furthermore Mr. 'President,' with respect to your vaccine mandate, we respond by saying âWe have no king but King Jesus." Subscribe for free to Breaking Christian News here