Please be in prayer for the three children as they begin to process the wicked and despicable abuse they endured for a decade. 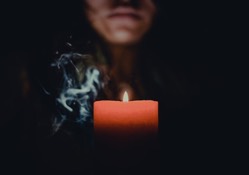 [Faithwire.com] A group of 11 adults in Glasgow, Scotland, have been arrested after reportedly committing sinister and sadistic crimes against three children for a decade. (Image: Unsplash-Caludia Ramirez)

All the parties to the charges have been accused of forcing at least two of the children, a boy and a girl, to participate in "seances" and use a Ouija board "to call on spirits and demons." They were furthermore forced to watch "classes involving witchcraft, point wands, and utter spells, thus causing them to believe that they could levitate," The Scottish Sun reported.

CBN's Faithwire has previously reported on the grave spiritual dangers of the Ouija board.

The other child was a little girl whom five of the defendants were accused of trying to kill when she was just weeks old, according to The Glasgow Times.

Included in the indictment were horrific allegations stating the defendants repeatedly raped all three of the children while other group members would "clap, cheer, and verbally encourage" what was happening. The assaults were purportedly recorded on video.

Court filings also state the group of adults would force the older girl "to act like a dog" and "eat cat and dog food, causing her to vomit." Six of the group members would allegedly taunt her while "wearing a mask of the devil" while blowing smoke into her face after consuming drugs.

While the revealed details are undoubtedly profoundly upsetting and unspeakably grotesque, local news outlets reported there are additional allegations so heinous and gruesome they have not yet been shared publicly... Subscribe for free to Breaking Christian News here