'We Will Rebuild a Culture of Life': Walk For Life West Coast 2022 Rallies Defenders of the Unborn

"When it comes to loving, people who have Down syndrome are truly exceptional. We are badly needed in this world!" -speaker Christi Hockel, who has Down syndrome 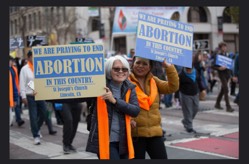 (San Francisco) — [LifeSiteNews.com] At the end of her presentation, a speaker at the West Coast Walk for Life delivered a strong rebuke to the President of the United States for his virulent pro-abortion stance while presenting himself as a Catholic. (Screengrab image)

"I have a message for Joe Biden," said Irene Zamorano-Archacki, a mother of seven and Silent No More Awareness Coordinator for Los Angeles County.

"You are a baptized Catholic, sir," said Zamorano-Archacki. "Start acting like it."

The large crowd gathered in front of San Francisco's City Hall on Saturday signaled its enthusiasm for Zamorano-Archacki's admonishment of President Biden with loud cheers and applause.

"The enemies of life were outraged and the defenders of life were jubilant when this year's recipient issued an infamous pastoral letter defending life," said Dolores Meehan as she prepared to announce the surprise winner of this year's Gianna Molla Award for pro-life heroism.

"Life is winning, and life will win," proclaimed the visibly surprised and moved archbishop, "and we will rebuild a culture of life."

Perhaps the most powerful message of the day came in the testimony of Christi Hockel, a woman with Down syndrome... Subscribe for free to Breaking Christian News here